If you'd love a fun monster puppet, then you're going to want to meet:
Parker the Monster!

Parker is a brand new professional quality live-hand puppet made in England by Hellyer's Puppet Workshop. He measures approximately 22inches (56cm) tall, and has an excellent arm span of approximately 48inches (120cm) allowing real scope for expressive arm gestures. He has a 'shock pink' tummy with individually sewn in purple spots. Parker's live-hands will enable you to pick up and handle props effectively and really add an extra level of believability to your show. You can perform with Parker on your own by pinning one hand to his side, or for maximum effect perform him with an assistant.

He's a great fun character who will really engage audiences of any age... he's a happy little monster :)

Like all the puppets made in Hellyer's Puppet Workshop Parker has been made out of great quality materials. Parker's body is made out of durable and lightweight mini-cell foam and his head is made out of durable and flexible reticulated foam. His body is covered completely in 2" pile 'shock pink' faux fur fabric with purple faux fur detailing. His head and hands are also coloured in the same way as you can see in the photos. Details on Parkers eyes are made form hand-dyed antron fleece. He is lined in polar fleece for added comfort.

We hope you love this character as much as we do - Happy Bidding!

Earlier this year I was asked to put together a shadow puppet show which could be part of a larger presentation. This added an interesting twist as it meant that we couldn't leave our props and stage set up... instead we had to walk everything on in full view of the audience. We received great feedback from the performance, and quite a few people were asking how it was done.... fortunately I had recorded one of the rehearsals so I have able to put together a split screen comparison video. There were two days of rehearsals between the two performances, but it gives you the idea.

Here you can see the whole live performance:


Below you can see the split screen version with "director's commentary" :)


Thanks for stopping by - I hope you found it useful.

Take care - Dave
Posted by HellyersOnline at 08:06 No comments:

Here's a little shadow puppet performance I put on recently... hope you like it. Take care - Dave
Posted by HellyersOnline at 11:52 2 comments:

So I saw an article online today explaining why Google+ was "Kicking Facebook's Ass"
I couldn't help but comment on the article, which I felt overstated the case for Google+ somewhat. If you're into this sort of stuff, here was my reply:

Brilliant propaganda! I admire your optimism.
Google+ is the best example of a 'false positive' that you could hope to find! As you rightly point out in your article people are flocking to Google+ because they don't have a choice. Google is making you sign up for Google+ in order to get the most out of its other services (YouTube, Documents, Analytics etc). That doesn't create a community though!
Simply throwing 20 people in a room doesn't make a party... and simply adding (what will become if it isn't already) millions of people onto a social networking site - doesn't make it a social networking site.
The key element is the 'social'. Doubtless Google has more potential reach than Facebook or any other site, but it has a shocking track record when creating community is concerned. The original batch of YouTubers who called themselves "the YouTube community" have mostly left YouTube now as it was clear to see that Google were far more interested in making ad revenue off corporate accounts rather than foster their own community... this has opened the door for LiveVideo, DailyMotion, Vimeo, Vloggerheads and many more to provide the community element that these people wanted. Google's other ill-fated ventures into 'community' would be Google Wave and Google Buzz - both retired (despite both have frenzied launches with people clambering to get their hands on invites).
A wise man once said "You can lead a horse to water, but you can't make him drink" I guess I'd like to say that Google has proven through its own chequered past that you can lead a vast quantity of people to a website, but you can't make them interact.

Take care - Dave
Posted by HellyersOnline at 12:35 No comments:

Dwayne is a brand new professional half-body puppet hand made in England by Hellyer's Puppet Workshop. He measures approximately 21inches (53.5cm) tall from the top of his antlers to his waist. He also has an excellent arm span of approximately 40inches (102cm) allowing real scope for expressive arm gestures. Dwayne is a 'live hand' (or Human Arm) puppet - so you can put your hands inside his to enable him to pick up objects and use props during your show without the need for elaborate sets ups. He's a great fun character who will really engage audiences of any age... his character is of a juvenile, oddball reindeer!
Like all the puppets made in Hellyer's Puppet Workshop Dwayne has been made out of great quality materials. Dwayne's body is made out of durable and lightweight mini-cell foam and his head is made out of durable and flexible reticulated foam. His body is covered completely in two colours of 1" pile natural coloured deluxe faux fur fabric. He is lined in dark brown polar fleece for added comfort and his neck is separated from his shoulders to allow greater flexibility of movement. 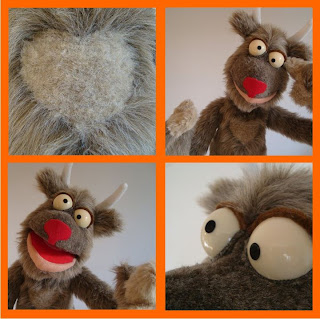 Check out more photos of him on eBay!

Posted by HellyersOnline at 17:39 3 comments:

I can't quite believe I went to my first puppet festival 15 years ago - and have been to one every year of my life ever since!

This year One Way UK's EPMF was held in Derby and Reading and I was fortunate enough to be invited to teach at both festivals. I was running workshops on a variety of subjects including puppetry for YouTube and a range of basic and advanced puppetry techniques.

I love visiting or working at puppet festivals as there is always so much creativity around the place which always help to accelerate my own creative process for my own projects. These festival was no different, but they were tiring too! It's tough teaching classes all day, I think across the two events 500 puppeteers attended, which is cool. After the second festival a bunch of us went out for a post-festival feast and hilarity ensued!

Posted by HellyersOnline at 17:06 No comments:

So yesterday I took my boy to see Sesame Street Live: "Elmo Makes Music"and I thought I'd write a quick blog about it.

Firstly I should mention my son is 21mnths old... so he doesn't have the longest attention span in the word, but he loves Elmo and Sesame Street. My wife and I thought we'd take a bit of a gamble and see if he would sit the a show. My son watches clips of Sesame Street on YouTube all the time (he has his own 'favourites' playlist of them!) so whilst Sesame Street isn't on normal TV in the UK he knows the characters (We occasionally get to see the Northern Irish 'Sesame Tree" which is good... but it's not the same).

As soon as we walked into The Capitol Theatre in Horsham I knew we were in for a good show, the stage set (even with curtains closed) was impressive and clean. The show was only on for one day at The Capitol... but it looked like a full house, there were certainly no spare seats anywhere near us. Just seeing the Sesame Street Live logo above the stage at the start made my son feel the need to randomly shout "Elmo"and point, which was encouraging, at least he knew why we were there! 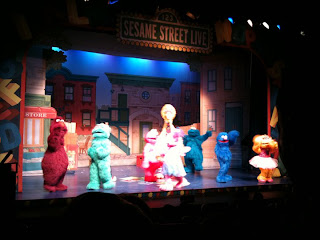 Once the characters came out on stage I was completely relieved... the characters were brilliantly made and very clean - in fact I am tempted to say that these suits were brand new they were so clean. Back in 2008 I was invited to help out with a short stint on Rainbow Live (initially as Zippy, then George). Whilst it was great fun to work on, and obviously I am thankful for the experience I have to say that the characters and costumes were all showing their age... at points embarrassingly so. Anyway the Sesame Street costumes were fantastic!

There were a couple of little slip ups, but otherwise the show went very well, certainly my son thought it was fantastic. During a group dance in the opening half Zoe got a little over-excited and slipped over right at the front of the stage, but recovered well. Big Bird also lost a piece of foam halfway through the first half. The foam fell out of the costume and Bird Bird walked off, not to return until the second half. Having not seen the show before I don't know if this is related or merely coincidence.

I'm not sure how many costume changes happened during the show, but Cookie Monster played a bigger role in the first half than the second... and having selected his cookie-jar shaker to be included in the band... it was a shame he didn't appear to play it! The only other slightly negative comment would be that Zoe and Abby Cadabby's voices were a little hard to understand because of the speed, pitch and accent.

However this is all nit-picking. The show was great and it held my son's attention all the way through. The crowd were getting involved with all the songs, clapping and singing along. I would love to see the show again, and will certainly keep my eye out for more Sesame Street Live's in the future!

Take Care - Dave
Posted by HellyersOnline at 10:50 No comments:

Recently I made a Turtle puppet for Surrey County Council. It was for an annual Childminders' Network meeting they host. They didn't request a turtle specifically - they told me to make whatever I wanted to. It was great to get the opportunity to make something totally new and without any limits on what I could do.
Why did you choose a turtle if you were allowed to make anything Dave?
My son is 18months old and last week he started saying 'tuh-tull' whilst sitting on his "finding Nemo"baby-changing mat. Simple really.
So here are a couple of photos of the Turtle under construction and a video of the completed character. I hope you like him. 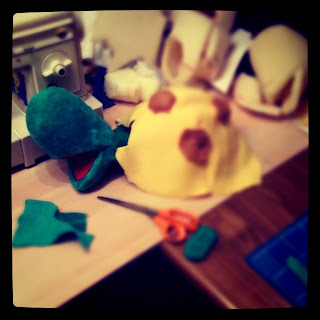 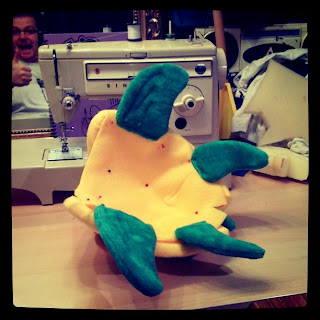 Here I'm finishing off the lining of the shell - you can see the fins already stitched in place
Posted by HellyersOnline at 21:03 No comments:

HPW in a nutshell

HellyersOnline
West Sussex, United Kingdom
After 15 years experience in puppetry performance David Hellyer started Hellyer's Puppet Workshop in the summer of 2005. Always feeling that actually designing and building the charatcer himself he would unlock new performance potential. David is excited by the new oppertunities!